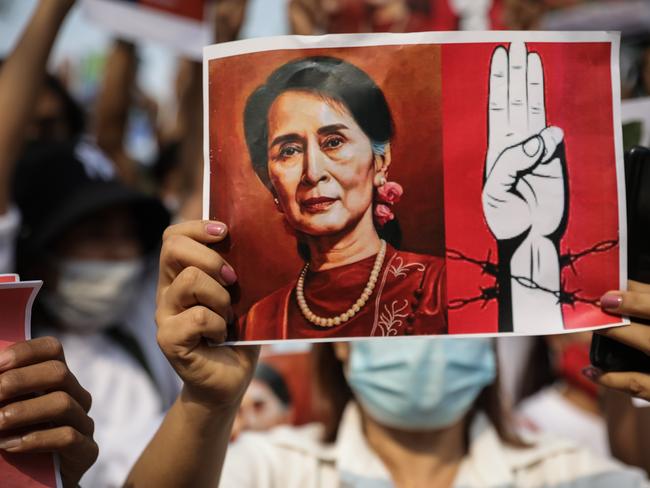 (Yangon) Footage has emerged of onlookers ducking for cover as shots are fired at protests in a town in Myanmar’s southeast against a military coup, demanding the release of deposed leader Aung San Suu Kyi.

Live videos posted to Facebook on Sunday afternoon show people hiding as armed, uniformed soldiers move up the street to break up protests in Myawaddy, near the border with Thailand.

Shots can be heard as the crowd of approximately 200 duck down.

Thousands of protesters have taken to the streets over the weekend, including Myanmar’s largest city, Yangon, to protest against the ousting of the civilian government by the country’s military.

According to the BBC protesters “poured in” along the main road north of Yangon, mainly younger men and women and many dressed in the red colour of the National League for Democracy (NLD), the party ousted last Monday and run by Ms Suu Kyi.

Red balloons were also visible from the crowd while motorists blew horns and passengers held up photos of Ms Suu Kyi.

It’s not yet known whether the shots heard are from live bullets or other, less lethal munitions designed to break up the crowd. It is also unclear if there are any casualties, but demonstrations across the country to oppose the coup had been so far peaceful.

Ms Suu Kyi was deposed by the military at the start of February over allegations of election rigging, and has since been charged for possessing allegedly illegally imported walkie talkies.

Ms Suu Kyi’s party, the NLD, secured a landslide victory in the country’s November election, winning more than 80 per cent of the votes.

“Respect our vote,” read one of the banners as protesters marched, through the city shouting anti military slogans.

The military is yet to present convincing evidence to back up their claims of electoral fraud.

Association of Southeast Asian Nations Parliamentarians for Human Rights chair Charles Santiago said the charges were “an absurd move by the junta to try to legitimise their illegal power grab”.

Myanmar President Win Myint has also been detained and accused of breaking coronavirus rules while meeting with people on the campaign trail.

Inside job likely in killing of army officer at camp

AN army officer was shot dead at a military camp in Nakhon Phanom with police believing it was an inside job with personal issues, possibly a love affair, rather than conflict at work leading to his death, Sanook.com reported today (Feb. 11). Lt Rung Chalerm, 34, was shot dead at 7.30 p.m. last evening within […]

By Thai Newsroom Reporters SOCIAL DISTANCING rule was last night (June 26) strictly maintained at Tree Town night market in Pattaya as dozens of young women were spotted hanging around and looking to offer themselves in suspected flesh trade, police said. The adolescent females mingled with hundreds of other visitors, mostly being Thais, at Tree […]

A Thai farmer is now happily harvesting good papaya crops on what was previously a sugarcane plantation even though this fruit is far more vulnerable to tropical diseases.

Pineapple farmers at a Chumphon district hope that online trade will help them out because the usual roadside sales have plunged sharply with far fewer people travelling amid the ongoing pandemic.

By Thai Newsroom Reporters
A drive is underway in Nakhon Nayok province to grow a quantitative volume of a certain marian plum genus while trying to register and safeguard it.

Thailand warns US of ‘conflicts’

Thai-US ties face fresh challenges with the former having stated it does not want an enemy in its midst while the latter is countering China’s rapid rise.