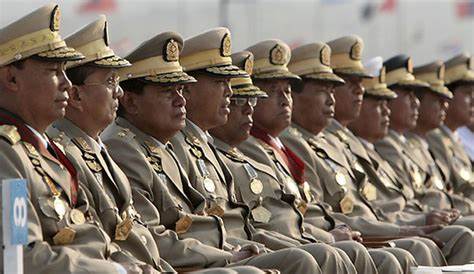 (Bloomberg News) – By seizing power on Monday, Myanmar’s generals are providing US President Joe Biden with an early test of his efforts to counter the appeal of China’s authoritarian model in Asia.

Army chief Min Aung Hlaing, who was bumping up against a mandatory retirement age this year, already faces sanctions from the US and UK due to a brutal crackdown against Rohingya Muslims that has led to accusations of genocide.

“While the coup will no doubt come with costs, the army clearly views them as affordable,” said Sebastian Strangio, author of In the Dragon’s Shadow: Southeast Asia in the Chinese Century.

“Recent events in Southeast Asia have shown that with China’s growing power, and democratic backsliding in the West, the US and other Western countries no longer have the moral authority or economic and political means to set the normative agenda in the region.”

A key part of the US strategy to counter China’s rise has been an effort to rally democracies in Asia to back a “free and open” region that contrasts with Beijing’s single-party autocratic rule.

Yet democracy advocates in places like Malaysia and Thailand have lost ground without consequences under the presidency of Donald Trump, whose own bid to overturn the US election results prompted a deadly mob to storm the Capitol.

Although ousted Myanmar leader Aung San Suu Kyi’s status as a democracy icon has taken a hit due to her defence of the army’s actions on the Rohingyas, she still has key allies in the US Congress.

Suu Kyi, who was detained along with other key leaders, issued a statement calling on the country’s 55 million people to oppose a return to “military dictatorship”.

Biden now faces a dilemma in crafting a response that will punish Myanmar’s generals without hurting the wider population, which suffered under sanctions imposed in the 1990s before the country’s shift toward democracy a decade ago.

As of the end of last year, China stood as Myanmar’s second-biggest investor behind Singapore with $21.5 billion in approved foreign capital. Beijing also accounts for about a third of all Myanmar’s trade — about 10 times more than the US.

Still, China will be careful to avoid doing anything that could alienate it with Suu Kyi’s supporters. During his visit last month, Foreign Minister Wang met with Suu Kyi and spoke about how they could cooperate on a number of investment projects connecting the mainland with the Indian Ocean.

“For the Chinese, Burmese politics is highly volatile and highly unpredictable,” said Yun Sun, director of the China Program at the Stimson Center. “China has been burned before.”

Other Asian nations will also hedge their bets. While the UK, Australia and the European Union have joined with the US in condemning Myanmar, the reaction of countries in the region was more restrained.

Most Asian countries continued doing business with Myanmar while it was ruled by a junta, and in recent years Japan and other nations have invested in the country as an alternative manufacturing base to Thailand.

Myanmar’s military has retained a heavy hand even after it transitioned to democracy more than a decade ago. On Monday it said the power seizure complied with the constitution, which allows generals to take over during vaguely determined times of “emergency”.

But an expectation of democracy has grown among its relatively young population.

Since 2011, Myanmar has opened industries such as energy exploration, insurance and banking to foreign participation, while liberalizing the telecom sector to allow millions of people to access mobile phones and the internet for the first time. It also lifted draconian censorship rules.

The military’s statements showed an awareness of the broader shift in society, emphasising that the moves were not opposing democracy. It vowed to hold “free and fair” elections after the state of emergency expires in a year.

While it’s unclear yet how fervently the population will resist the military, on Monday some residents of the country’s biggest city saw the move as a clear step backward.

Aung Kyaw Oo, a teacher at a private school in Yangon, said poor people are likely to suffer the most if the US and others now put sanctions on Myanmar.

“I am not a big supporter of the NLD, but I do believe we will see further development of our country only under a civilian government,” he said, referring to Suu Kyi’s National League for Democracy party.

“Myanmar cannot go ahead and progress under the military rule.”

Big fire at oil warehouse next to petrol pump

A FIERCE fire is raging at an oil warehouse which is next to a PTT pump in Nakhon Pathom province and initially 10 fire engines have reached the scene and are battling the blaze, Thai Rath newspaper said this evening (April 21). The fire at Prapakorn Oil Company in Om Yai subdistrict, Samphran district, broke […]

THE FINANCIALLY-STRESSED wife of a policeman in Rayong shot dead her teenage daughter before jumping down from the fourth floor of police flats to her own death this morning (Nov. 4) with her shocked husband prevented just in time from taking his own life, Thai Rath newspaper said. At 8 a.m. this morning Pol. […]

A MINISTER’S projection that within seven years Thailand will be able to send a spacecraft to orbit the moon was heavily criticised today (Dec.15) with one of the detractors being popular singer and actor Pharunyoo “Tack” Rojanawuthitham who pointed out that this would be a very improper use of national budget which should first be […]

French tourist cleared of monkeypox in one test

Thai woman is the country’s 4th monkeypox case, 2 others exposed

Prime Minister Prayut Chan-o-cha will likely survive next month’s censure/no-confidence motion with the help of “bananas” being handed out again after which a big cabinet shake-up looms.

Beware! Blocking an ambulance carries heavier penalty than you think

Netflix tests another way to charge for password sharing