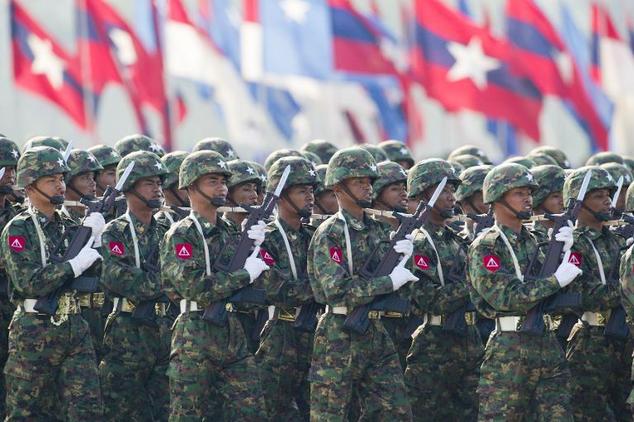 (Reuters) – Swaggering supporters of Myanmar’s army chief swung through the streets of Yangon, waving national flags from pickup trucks to cheer on his coup against a democratically elected government.

Footage posted on social media showed a crowd of several score gathered in the centre of Myanmar’s biggest city to celebrate Senior General Min Aung Hl seizing power. But the mood elsewhere in the city was laced with fear, anger and frustration.

“I feel angry. I don’t want more military rule,” said Zizawah, a 32-year-old commercial director who only wanted to give one name because of fear of reprisals.

“The way they act is like a dictatorship. All of us know who we voted for.”

Myanmar’s army said it had detained elected leader Aung San Suu Kyi, whose National League for Democracy (NLD) party had won a landslide in a ballot in November that the military disputed.

“Today is the day that people are happy,” one nationalist monk told a crowd of military supporters in a video published on Facebook.

Suu Kyi is hugely popular in Myanmar as the figurehead of decades struggling to end previous juntas despite anger in Western countries over her handling of an exodus of Rohingya refugees fleeing an army crackdown in 2017.

“We had a lawful election. People voted for the one they preferred,” said Theinny Oo, a development consultant.

“We have no protection under the law now. We feel insecure and in fear.”

News of the coup, announced on military-controlled media, broke sporadically because of major disruptions to internet connections for mobile phones that many people rely on for news and keeping in touch.

Queues formed at ATMs, but many stopped working because of the disruptions to the internet while banks announced that they were being forced to close.

Markets were busy as people rushed out to stock up on essentials.

“I went to the market twice this morning. I bought rice and groceries, said one 19-year-old woman in the Yankin district who was afraid to give her name. “I don’t know what is happening. I am a bit scared.”

There was no sign of any anti-military protests on the streets of Yangon or in the administrative capital Naypyidaw, where parliament had been due to start it’s first post-election sitting later on Monday.

Yangon had been the scene of protests in the 1980s and 2000s that ultimately helped lead to the military agreeing to a transition to democracy.

A verified NLD Facebook account published a statement on behalf of detained leader Suu Kyi that she had written before being detained, saying that people should not accept a military coup and should protest. NLD officials were not immediately available to comment on the statement.

The military, whose favoured party was drubbed in the Nov. 8 election, cited what it said was the electoral commission’s refusal to address voting irregularities it had reported.

Pro-democracy activists, who had long complained of backsliding under Suu Kyi herself, were dismayed.

“Our country was a bird that was just learning to fly. Now the army broke our wings,” student activist Si Thu Tun said.

At least 7 dead on bloodiest day of Myanmar protests

By Reuters Staff, published by US News & World Report MYANMAR police fired on protesters today (Feb. 28) in the bloodiest day of weeks of demonstrations against a military coup and at least seven people were killed and several wounded, political and medical sources and media said. Myanmar has been in chaos since the army […]

By Associated Press, published by Star Tribune Washington — Democrat Joe Biden narrowly overtook President Donald Trump in the vote count in Georgia and Pennsylvania early Friday (Nov. 6)  with the presidency hinging on the outcome of tight contests in key battleground states. Neither candidate has reached the 270 Electoral College votes needed to win […]

By Reuters, published by Microsoft News Washington – The top US general told lawmakers that he did not foresee the military playing a role in the election process or resolving disputes that may come during the November presidential election, according to a document released on Friday. Chairman of the Joint Chiefs of Staff General Mark […]

A Thai farmer is now happily harvesting good papaya crops on what was previously a sugarcane plantation even though this fruit is far more vulnerable to tropical diseases.

Pineapple farmers at a Chumphon district hope that online trade will help them out because the usual roadside sales have plunged sharply with far fewer people travelling amid the ongoing pandemic.

By Thai Newsroom Reporters
A drive is underway in Nakhon Nayok province to grow a quantitative volume of a certain marian plum genus while trying to register and safeguard it.

Thailand warns US of ‘conflicts’

Thai-US ties face fresh challenges with the former having stated it does not want an enemy in its midst while the latter is countering China’s rapid rise.